“Harris has carved out a name for herself in the cozy mystery world with her engaging, humorous Sarah Winston mysteries.” E.A. Aymar, Washington Independent Review of Books

BAD TO THE BONE

Chloe loves her new life pouring beers and mixing cocktails at the Sea Glass Saloon in the Florida Panhandle town of Emerald Cove. But on the job, the only exercise she gets is walking from one end of the bar to the other, so in the mornings she loves to run on the beach. On this morning’s foggy run, she spots a sailboat washed up on a sandbar. Hearing a cry, she climbs aboard the beached vessel to investigate and finds not only a mewling kitten—but a human skeleton in the cabin.

The skeleton is tied back to Chloe’s friend Ralph, whose wife disappeared on a sailboat with three other people twelve years ago. Believing his wife was lost at sea, Ralph remarried. Now he finds himself a murder suspect. Chloe is determined to find out who’s been up to some skulduggery, but her sleuthing will lead her into some rough waters and some bone-chilling revelations…

Signed copies are available at One More Page in Arlington, Virginia. 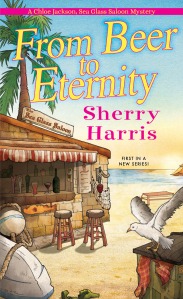 A whip smart librarian’s fresh start comes with a tart twist in this perfect cocktail of murder and mystery—with a romance chaser.

With Chicago winters in the rear-view mirror, Chloe Jackson is making good on a promise: help her late friend’s grandmother run the Sea Glass Saloon in the Florida Panhandle. To Chloe’s surprise, feisty Vivi Slidell isn’t the frail retiree Chloe expects. Nor is Emerald Cove. It’s less a sleepy fishing village than a panhandle hotspot overrun with land developers and tourists. But it’s a Sea Glass regular who’s mysteriously crossed the cranky Vivi. When their bitter argument comes to a head and he’s found dead behind the bar, guess who’s the number one suspect? In trying to clear Vivi’s name, Chloe  discovers the old woman isn’t the only one in Emerald Cove with secrets. Under the laidback attitude, sparkling white beaches, and small town ways something terrible is brewing. And the sure way a killer can keep those secrets bottled up is to finish off one murder with a double shot: aimed at Chloe and Vivi.

From Beer to Eternity is Sherry Harris at her best. It has a great love interest, a layered backstory, fun, and some hysterical laugh out loud lines. I can’t wait until my next visit to Emerald Cove. Kellye Garrett, Anthony, Agatha, Lefty, and IPPY Award-Winning Author of the Detective by Day Mysteries

Boasting an eclectic cast of characters, a small-town atmosphere and engaging dialogue, this was an entertaining book to read and I can’t wait to see what new adventures await Chloe and her friends in this pleasantly appealing debut series. Dru Ann Love, Dru’s Books Musings

If you order books from One More Page in Arlington, Virginia you can get a signed copy and a cute Kensington Cozies coaster, that includes the image of FROM BEER TO ETERNITY, with your signed book! Click here for a link.

For bargain hunter extraordinaire Sarah Winston, starting life over in Ellington, Massachusetts, has been a true trash-to-treasure success story, except when there’s a run on dead bodies…

Sarah’s latest client, Alice Krandle, is sure she has a fortune in antiques on her hands. She’s already gotten a generous offer for the whole lot before her garage sale has even begun, but she thinks she can earn more with Sarah’s expert help. The problem is that while Sarah’s sorting through items from decades past, her landlady, Stella, faces a clear and present danger.

Stella’s kidnapper has contacted Sarah with a set of instructions, and “Don’t call the police” is at the top of the list. But they didn’t say anything about Sarah’s friend Harriet–who happens to be a former F.B.I. hostage negotiator…